Let it be known that I’m not a great fan of how our regional council, ECan, presents their patronage statistics. In August 2018, they reported the following to the Greater Christchurch Public Transport Joint Committee:

Patronage for the year ending 30 June 2018 rose by just under one percent to 13,572,240 boardings for the year. While only a modest increase, it should be noted that this is the first time in four years (and only the fourth time in the last 10 years) that yearly patronage has increased.

That’s got to be good news, eh? Maybe. But only if you overlook that we experience massive population growth. The following graph shows population growth for Waimakariri, Christchurch and Selwyn, based on revised population data issued by StatsNZ in October 2018:

The population growth from mid-2017 to mid-2018 was exactly 2.24%, i.e. patronage per capita has in fact fallen. Maybe the news, as presented to the committee, wasn’t so good after all?

The eagle-eyed amongst you may have spotted that the graph above shows a 2018 population well above half a million people and I should point out that Greater Christchurch as defined for planning purposes excludes some areas from all three councils. The actual population within Greater Christchurch sits at just over 480,000. The population growth within the true Greater Christchurch area was 2.32% over the same period so it’s basically the same. I’ve chosen that simplification for all the analysis as it’s much easier to get population time series for the district council areas.

I gave a presentation to our regional council, known as Environment Canterbury but commonly abbreviated to ECan, in April 2018 as part of their Long Term Plan consultation (sample slide below). One of my eight recommendations to them was that they change their reporting to patronage per capita. It’s simply misleading if you don’t do so when you have big changes in population. The graphs shown to the ECan decision makers may imply that ECan is doing well when it is not. Leaders cannot make good decisions when data reporting is not showing the true picture. 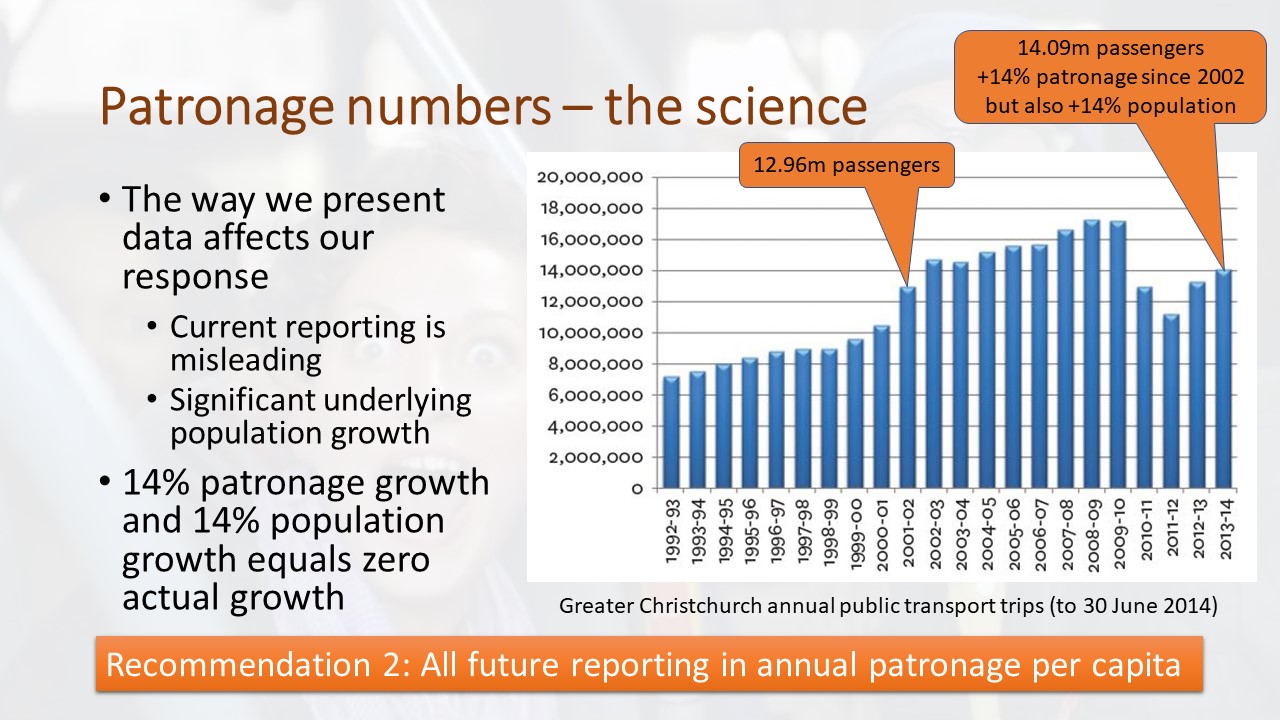 So how are we doing with patronage per capita? The following graph shows monthly data between July 1999 and June 2018. Looking at the blue line, there are big seasonal variations and that makes it hard to read the graph. For that reason, one uses a data-smoothing technique that creates a 12-month rolling average (the orange line).

When you leave out the spin and look at hard data, it can be clearly seen that patronage per capita has been falling since 2014. In June 2017, the average person took 27.19 trips on public transport and a year later, the average person took 26.55 trips. A “rise by just under one percent” is fake news; that’s rather a drop in patronage of just under one percent.

And it isn’t hard to explain why that has happened; the “Hubs and Spokes model” that has been gradually phased in since December 2012 forces many passengers to change bus. Forcing people to change bus represents a drop in level of service. Forcing people to change from a high-frequency route to a low-frequency route without a guaranteed connection is a recipe to really piss people off. Maybe Christchurch’s sky-rocketing cycling number can, at least in part, be explained by public transport having become much less attractive over the last few years?

So how are we doing compared to the other two big cities? Before I answer that, I offer the observation that while Auckland Transport and Greater Wellington publish their raw data on their websites, ECan does not. In Christchurch, you have to go begging to get monthly user numbers. Why? The other cities are transparent; why is that different with ECan? Do they want to hide what’s going on? I’ve asked those questions and they haven’t been answered.

The chart below compares patronage per capita for Greater Christchurch, Greater Wellington, and Auckland.

A few things stand out:

If you were to linearly project Wellington and Auckland’s patronage performance over the last decade into the future, you would see Auckland catching Wellington during 2030. It will not take that long for these reasons:

My guess is that Auckland patronage numbers will meet the Wellington patronage somewhere between 2025 and 2027.

Let me state that there’s nothing principally wrong with having a hubs-and-spokes network. These things can work. I’m not familiar enough with the Wellington network and bus frequencies to be able to judge whether or not it could work there. What I can say is that it will never work in Christchurch as there simply isn’t the bus priority infrastructure in place that is needed to ensure that the frequent core routes arrive at the hubs on time. If you cannot ensure reliable connections to services that run at a lower frequency, you will soon get rid of that part of the ridership with transport choices. And that is why we are seeing declining patronage in Christchurch.

Introducing hubs-and-spokes in Christchurch was never about making public transport better or attracting more passengers. It was about saving cost, with the commissioners aiming to meet the national fare box recovery policy introduced by Steven Joyce as quickly as possible (see my Metrocard post for more context). At the time this was implemented, ECan was run by a group of commissioners installed by the fifth National Government. Bus kilometres were cut by 10% to 15% and the planners were keeping their fingers crossed that they wouldn’t lose patronage in the process. Well, their wish didn’t come true. One of my recommendations at the LTP hearing was that councillors and commissioners should acknowledge that introducing hubs-and-spokes in Christchurch was a mistake.  There’s a video recording of my presentation; I think I had their undivided attention for 12 minutes.

We need to do better. Patronage ought to be increasing, not decreasing. I told ECan councillors and commissioners that they ought to aim for a “superb level of service”. What do you think ought to be done?