Christchurch hospital car parking has long since captured the imagination of the Christchurch populous.

The hospital has little on-site car parking. If you want to drive to the hospital there are plenty of pick-up drop-off spaces, but if you want to store your vehicle for any length of time you have to put it in either on-street parking nearby, or the multi-story parking building on Lichfield Street (800m walk or take the free hospital shuttle).

This is a strange situation for Christchurch folk, who are used to seeing swathes of free, unrestricted asphalt surrounding every building in the city. It takes a certain mental shift to consider parking a little further away, walking/scootering, riding a bike, or catching a bus to the hospital. And at a hospital there are special situations where parking hassles are more annoying than normal – my friend missed the birth of his child because he was cruising up and down Riccarton Ave looking for a carpark.

The situation is further complicated by the blurry line between who should provide parking at a hospital. There seems to be a lot of pressure directed at city councillors and the mayor has even waded into the debate at times, when in reality it is not so much the responsibility of City Council as the Canterbury District Health Board. Generally if a land-owner wants more parking for their activity, it is up to them to provide it, not Council. The only exception is in the city centre where Council provide some parking buildings because it is not practical (nor desirable) for each site to have their own parking.

Another thing complicating the issues is that the Health Board has a vested interest, with a vision  “To improve, promote, and protect the health and well-being of the Canterbury community.”  With links between travel choice and health being very strongly understood now, part of achieving this vision means encouraging more people to walk, cycle and take public transport, and discouraging people from driving. This is what the Health Board have said previously about the cycleways programme:

“One of the key ways of tackling our rising rates of obesity, diabetes and heart disease is to change our environment so that it’s easier to get active. This is exactly what cycle lanes help to do,” Dr Humphrey says.

“Not only do cycle lanes lead to a healthier population, they’re great for our environment. More cyclists means fewer cars, and that means lower carbon emissions. In a time when the world is grappling with how to respond to climate change, cycle lanes stand out as an easy way to lower emissions and protect our planet.”

A couple of months ago someone put up the idea of building an absolute behemoth of a carpark underneath Hagley Park. It would contain 1,451 carparks. For context, the 8-storey Lichfield Street building contains 805 carparks. 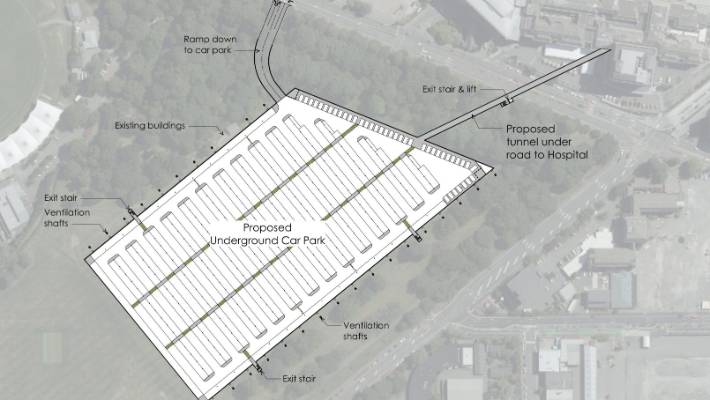 Here is another image of the proposed carpark with the existing hospital footprint. The carpark is larger than the entire hospital.

He did some costs and figured it would cost about $116 million to build.  This is a lot of money. It equates to $80,000 per car park. If they were leased at the going rate of $6 per day every day of their existence, you’d still only make a rate of return of 2.7%.

For a grasp of the scale, here are some alternative things we could buy for $116m:

I’m not sure which of these uses is the best option, but I think we can be fairly confident that a giant underground vehicle storage facility is not it.