Local election preliminary results are in now and here are some initial thoughts.

It seems to have been taken down now, but the Stuff live coverage over the weekend reported that 2019 had a higher turnout of young voters than the last few elections, a higher number of younger candidates elected, and a higher proportion of female candidates elected than previous local elections. The reporter surmised that the increasing activism regarding climate change among young people (as evidenced for example by the massive protests being held here and around the world) was the primary driver behind this.

It’s an nice idea that a tidal wave of young voters has put into power a bunch of talented young people who will force our local governments to start giving future generations some thought. But, in Christchurch at least, you don’t have to dig very far below the surface to realise things are a little more complicated than that.

Firstly, Lianne Dalziel was relected as Mayor with 48,000 votes beating Daryll Park with 30,000. To me this was a big relief. Daryll Park was a climate science denier who kept repeating that he would massively cut rates but could never explain how he planned to do this. It seemed his one big plan was to cancel all cycleway projects, but this would have accounted for less than 1% of the savings he was promising. I think he got a lot of votes from people who just wanted a change. Daryll Park would have been a change but, in terms of transport, I don’t think it would have been a good one.

In my ward, Spreydon, there an interesting mini-battle going on; Dr Melanie Coker pitted against Peter Gatonyi. Dr Melanie Coker has a PhD in Biochemistry and is very aware of the science behind climate change, with increased action being one of her core policies. Peter Gatonyi couldn’t be more of a contrast. His promotional video is some angry chap sitting in his idling double cab ute complaining that he’s had a gutsful of Council. His whole campaign revolved around cancelling cycleways, spending more on roads (traffic lanes), and providing more and cheaper car parking throughout the city. His social media campaign kicked off with this: 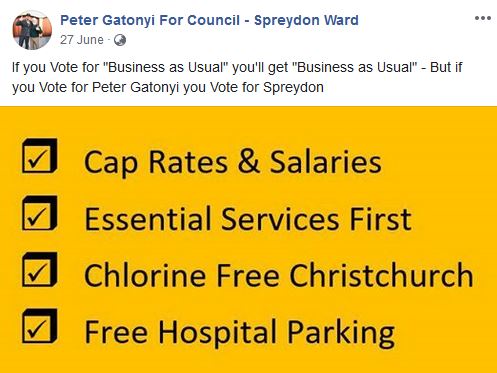 Adding that last bulletpoint seems like a parody to me, something a politician in a Monty Python skit might do. But apparently he genuinely doesn’t see the contradiction between the first two points and the last one.

Peter Gatonyi spent a lot on marketing – there were big trailer mounted billboards parked around the area, signs on fences all over the place and leaflets in every letterbox. In contrast Melanie Coker seemed to have a less marketing –  I saw a few signs on fences but that was about it.

Yet Melanie beat him hands down with nearly triple the votes. Melanie got 3,500 while Peter got 1,200. This gives me some hope for our future.

Stuff reported that there are three new councillors in their 20s (last term there were none). In the Riccarton Ward (which includes the university) 23 year old Catherine Chu stormed in, but I’m not sure that climate change activism had anything to do with it. Catherine Chu is part of “Independent Citizens” which is essentially National at Local Politics Level. And the candidate she beat was Anthony Rimell – who has previously supported stronger measures to address climate change. 28 year old Sam MacDonald won the Waimairi ward. He is also part of the “Independent Citizens” party and also works for contractor Downer (currently constructing the Christchurch Southern Motorway, among other things).

I think it’s great that younger people are making inroads and our Council is beginning to actually look like the population it represents. But I’m not convinced that changing views on climate change is a big part of these particular three people being elected.

Of the 17 Council positions, 11 are filled by returning candidates while 6 are new faces. It’s heartening to see that many of the returning ones are the biggest champions of balanced transport networks; Sara Templeton, Mike Davidson and Pauline Cotter. One of the catch cries of the anti-cycling group is a warning to Councillors that they’ll get voted out if they keep building cycleways – Councillors can take heart from these results that that warning is unfounded.

So there’s some initial thoughts on the City Council election results. I have more but I’ll leave it at that for now. Canterbury Regional Council results to follow.

What are your initial thoughts?