On Monday we had our second public workshop to discuss Canterbury Passenger rail. Like the first workshop, we had a good turnout of around 50 people, again with good representation from a range of backgrounds: the general public, community groups, engineers, planners, politicians and commissioners.

The format was very different though this time. We took a step back from looking at solutions, and asked “what is the problem we are trying to solve?” In small groups, we discussed several problems we had come up with before the workshop, and added to these to come up with the following six problems:

We then did an online exercise where people used their phones to rate the importance of each problem. The image below shows the average ratings together with the distributions.

Scoring was reasonably tight between the six problems with scores all falling between a narrow band from 6.5 to 7.6. This shows that all six problems are important to people.

There were however three problems that stood out a little over the other three; reduced well-being for society, providing housing with good access, and degrading of environmental outcomes.

The distributions are interesting. Most of the problems had scores ranging from 1-10. Even the highest rated problem, reduced well-being for society, had a few people who thought this was not important at all. Only the problem about providing housing with good access did not receive any low scores.

At this point the Minister of Housing and Transport, the Hon. Phil Twyford called to say he was available, so we put him on the big screen. Our intention to record the call was thwarted by our lack of technical nous. The best I could manage was to capture most of it on an extremely poor quality phone camera recording. I’ve uploaded the audio here (update – I’ve spliced together 2 different recordings so got the whole thing now). 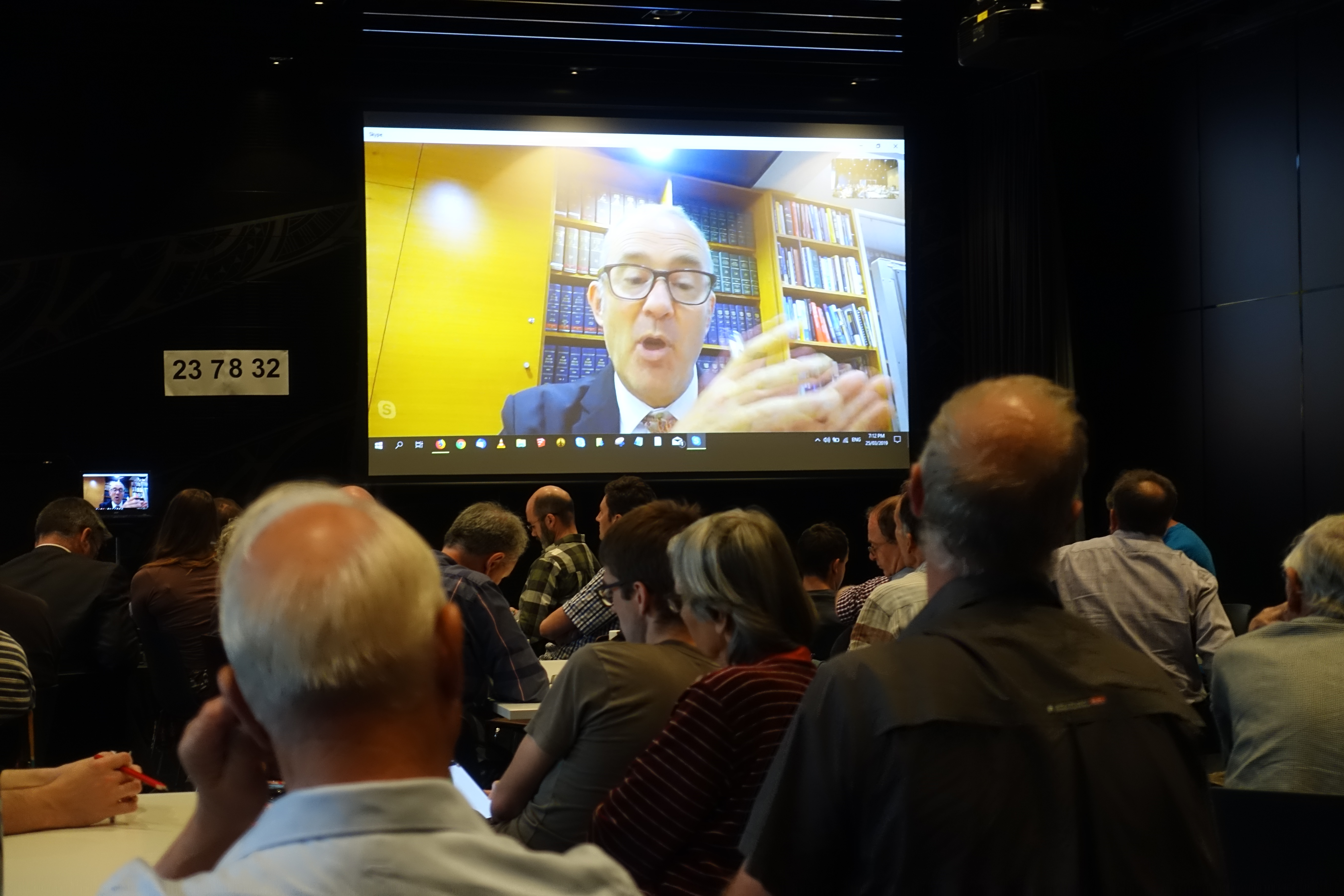 If you don’t want to listen to the full recording, I’ve briefly summarised what was said. Phil began by outlining the problem:

“In New Zealand, our cities have been failing.  For a highly urbanised country, we’re not very good at managing the growth of our cities, at integrating transport and housing policy, at investing in the infrastructure that’s needed – these are some of the big challenges that we have.”

He spoke about the need to reduce car dependency, and get more of our urban travel happening by walking, biking and using public transport.

“In NZTA, our transport agency, they spend 3.5 billion dollars a year of our taxes on the transport system. Mostly they’ve been an agency concerned with building a whole lot of motorways and roads. And now we’re asking them to, still build motorways and roads occasionally, but we’re asking them to work in partnership with local government to change human behaviour. Not just to spend a billion dollars here or fund a project there, or build a new motorway, but to make it their business to actually change human behaviour and drive that mode shift that we need to see.”

But making this happen is easier said than done, it requires several things to all be in place; high quality infrastructure, useful services, intimate integration with land use, and workable funding tools, which in turn require a strong public desire that translates into political will. He talked about setting up a Housing and Urban Development Authority (HUDA) which will be empowered to develop transport infrastructure in conjunction with land use changes.

“The reason we are setting up this new organisation, this new central government agency to do housing and urban development, is that we’ve really struggled in New Zealand to, not only to open up new areas of development and urban growth, but particularly to undertake brown or grey-fields development within existing cities.”

He talked about rapid transit being the spine of a public transport network, which all the other services can hang off. He finished with saying what he thinks the next step in Canterbury needs to be.

“I think the project in Canterbury really is to think through what an integrated housing and urban development and transport Urban Development Strategy would look like for Canterbury.”

“I look forward to Canterbury coming up with a really fantastic, 21st century, joined up plan for urban development that touches on the challenges I’ve been talking about, and is an opportunity for central government and local government to work together on.”

There were plenty of good questions at the end too. I won’t go into all of them here except to say they covered ideas for a unitary transport authority for Greater Christchurch, concerns about conflict between central and local government arising through the new HUDA, and the need to get transport into the political domain more than what it currently is in Christchurch. Listen to the audio file for more!

Axel Wilke then rounded the evening off with a presentation on the Northern Arterial, and in particular the Downstream Effects Management Plan (DEMP) currently under consultation by Christchurch City Council. He’s developed a counter-proposal where DEMP isn’t needed as it focuses on a much more attractive public transport solution (the ‘carrot’) combined with demand-reducing measures (i.e. the removal of general traffic lanes and the introduction of much more paid-for on-street parking – the ‘stick’). The details are described in an earlier blog post.

Feel free to help yourself to the slides shown during the evening.