This post first appeared at TraNZport and is republished with permission.

Further speed limit changes have been approved in Christchurch’s inner city, which will see a number of roads changed from 50 kilometres per hour to 30 kilometres per hour. This decision was made despite overwhelming opposition from the submissions process. 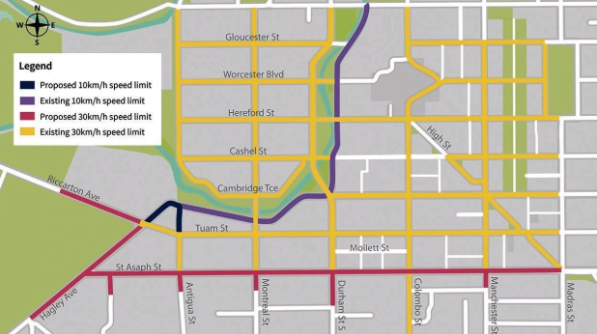 Cue outrage. “It’ll take too long to get anywhere”, “it’ll increase congestion”, “it’s anti-car” and “it won’t improve safety”. That pretty much sums up the kind of things you’ll hear, whether on social media or blaring across the front page of newspapers. The same arguments have been heard in Wellington and other cities where similar changes have been implemented or proposed.

According to this article most people didn’t want these changes to happen, nearly two thirds of submissions opposed it. Why? Well, because, in general,  from what I stated above, but also because, as many submissions on the changes said (120 of them), it would deter people from going to the city centre. So let’s look over some of these generalised objections and see if they hold up.

The short answer is “no”. First, if it did, then journey times would increase drastically. Take this example in Wellington as an illustration of how little or nil congestion eventuates. The reason is likely that people find another, more appropriate, route if the speed limits deter them, or that the nature of the road in the first place was such that it makes little difference. If you haven’t read about the concept of “induced demand” I suggest you Google it and then take some time to read this post on Greater Auckland to explain the effect of removing or restricting road access.

It has to be asked why people traverse inner city roads as part of long commutes. It’s not really what those roads should be used for. Rather, they should be for dispersing incoming and outgoing inner city traffic and for local travel (if even that, but that is another discussion). Being an inner city environment, I simply don’t understand any logic to opposing these speed reductions on the basis of perceived congestion or travel time increases, even if they were real.

Are these policies “anti-car”?

These types of statements really rile me up. Accessibility by car should not be the determinant of the quality of a neighbourhood or precinct, at least not in general. If that was the case then most destinations would be terrible ones that people wouldn’t go to in the first place. Furthermore, it’s such a sweeping statement that you cannot possibly measure whether it is true or not. I mean, reducing the speed limit is hardly confiscating every car and putting them on a giant bonfire. How do you define such a thing? It’s incredibly subjective, emotive and, in my opinion, not really a thing.

I’ve heard this one a lot and can’t really understand why I still hear it from people. Just this morning I had to inform a colleague that indeed it is true that reducing  inner city speed limits reduces the risk of injury-causing crashes.  I think people simply feel these speed limit reductions are a needless overreaction, that 50 kilometres per hour is slow enough and a reduction won’t achieve better results. I mean, it kinda sounds and feels plausible as 50 kilometres per hour doesn’t feel fast. This, however, is a really good example of why using evidence and not “gut feeling” is important in policy making. I’ll leave this bit with a link to an article referring to the benefits of the mass-hysteria inducing changes (including speed reduction) to St Asaph Street in Christchurch. Yes, the very same street everyone thinks of as a dangerous hell hole.

If people can’t drive at 50 kilometres per hour they won’t go to the city centre!

These types of arguments make me laugh. A lot. And cry a little too. Apart from everything pointed out above, if you are hell bent on avoiding a location because you now have to drive at 30 kilometres per hour instead of 50, then that location isn’t going to miss you very much (probably because you never went there anyway). It’s a completely absurd argument. Surely there is greater reason for you to visit somewhere than the speed you have to drive on the final approach, where, because it is quite built up and busy, you probably wouldn’t even go that fast anyway.

It amazes me how often arguments against speed limit reduction contradict each other. It’ll slow down the commute, it’ll cause congestion, it’ll turn people off going to the city centre and so on. These simply aren’t compatible arguments and, as we can see, aren’t borne out by the evidence. Everywhere I can think of that has had traffic calming measures put in place, including the compete removal of traffic, has resulted in a much better public space. That is good for people, and good for business.

We need to improve the message and how it is delivered

What this issue highlights for me, and what I want to explore more in future posts, is how we can better communicate these types of issues with the general public. Clearly there is a problem here, where the detail (i.e. facts) is too complicated to understand by most people, and the high-level description of the alternative, which is usually highly misleading though easy to digest and “understand”, is able to be utilised by parties interested in scuppering support to further their own ideologies.

That might be sounding a little tin-foil-hat, but it is a genuine problem experienced across a range of sectors, including, most prominently, in science and health. I think it is great that facts and good reasoning have prevailed in Christchurch, and I hope that what eventuates will start to turn the tide on how such transport policies are viewed and debated in the future. This is, however, the same issue that crops up with bike lanes, bus lanes, rapid transit and more. If we want to see robust debate free from emotion and misleading information, we will have to work harder in the advocating space to ensure that messaging is delivered effectively.