A few months back I saw an interesting thread of tweets written by Kent Lundberg, an urban designer who has been a big part of the revival of the Auckland city centre in recent years. 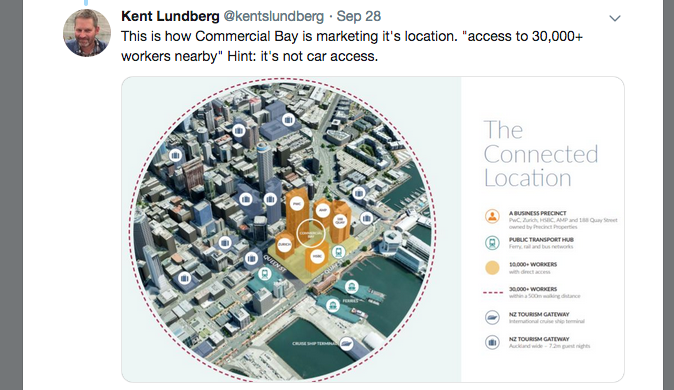 I think it’s a neat wee summary of what makes city centres tick. I took 3 points out of this:

Thinking about how Christchurch compares to Auckland on these 3 points.

My over-riding impression of Cantabrians is that they don’t have a great understanding of what makes cities tick. I know people who see the central city as little more than somewhere they can go shopping when they want an alternative to their suburban mall, or a place to visit occasionally to have a nice meal out. The city centre is these things, but it is so much more. It is the region’s most critical place of business, the engine room that guides the whole Canterbury economy. If our engine room is horribly inefficient then that’s going to impact us all, even people who seldom go there. And likewise, if we can make it work more efficiently then that doesn’t only benefit CBD workers, it benefits all of us.

So for a more successful city, we need to make it easier for large volumes of people to get to and from the city centre, and to move around once they’re there. We need to make it easier for businesses to operate centrally, and we need to allow more people to live centrally. Auckland is paving the way for us to follow, with their public transport resurgence, economic resurgence and rapidly growing central city population.

2 thoughts on “What Makes Cities Tick?”