This article first appeared at TraNZport and is republished with permission.

Recently, new light rail projects have opened in smaller Australian cities. I find this rather curious as in New Zealand we still debate the suitability of funding large public transport projects, even in our largest city.

Investment in public transport has long been a controversial topic in New Zealand and, as weird as it seems, it still is. Support for road building has generally been high, with little scrutiny of costs vs benefits and so forth (except if the road goes near your house, in which case your typical New Zealander will shake a good fist about it). Why? Probably because the wider benefits of roads seem tangible to most people, whereas the benefits of a rail tunnel under Auckland might be a little hard to see from the perspective of someone wedded to their car, which happens to be most of us given the auto-dependence successive governments have supported for decades.

It is a curious moment right now, with a government that is friendly towards the concept of mode shift, including investments in cycling and public transport. Auckland has proposed, and the government backed, a reasonably large light rail project, in addition to a new busway and the City Rail Link currently under construction. Wellington is waiting on word (seemingly forever) on light rail (or some other form of rapid transit) while Christchurch has proposed supercharging its existing bus network and investigating two rapid transit routes. This, of course, all requires the spending of large amounts of money. Cue controversy.

I hear a lot of excuses for why we shouldn’t raise the bar for public transport spending in New Zealand cities. Usually they are along the lines of “people just prefer cars” or “our city isn’t the right (insert geographic or demographic feature)”. So what are other, comparable, cities doing across the ditch? 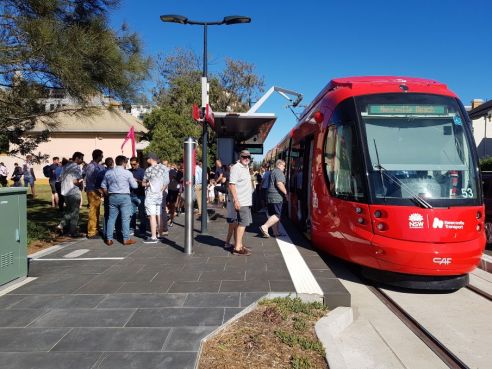 Yes, they did. These spread out, smaller Australian cities recently opened the first stages of their respective light rail networks. What’s more impressive is that, in both cases, there doesn’t appear to have been the scandal of cost blow-outs and project delays seen in larger cities (like Sydney, for example). Both these cities are comparable to Wellington and Christchurch in terms of population size, and aren’t particularly high density cities either, especially Canberra (and before anybody starts listing population measures remember that figures for Australian cities are metropolitan area measurements that New Zealand does not define).

Both of these cities have a lot in common with Wellington and Christchurch, including a high rate of car use (like most New  Zealand and Australian cities), yet here they are spending money on rapid transit infrastructure. Newcastle already has a commuter rail link to Sydney and the Hunter Valley to boot. For good measure, you could probably add the Gold Coast to the list, although it is a little larger.

While Wellington features a commuter rail network, Christchurch now takes pride of place as the largest city in Australasia without any form of rapid transit. Arguably, on “metro area” measurements, Christchurch is larger than both Newcastle and Canberra (the Greater Christchurch Partnership area encompasses approximately 480,000 people and growing at more than 10,000 per annum).

If Newcastle can justify a light rail line linking its rail station to the city centre, then surely Wellington can justify some form of rapid transit linking its station into the central city and along the higher density corridor to Newtown and (eventually) the airport. Over 13.5 million trips are made on Wellington’s commuter rail network every year, most trips going through Wellington station. The Central Coast and Newcastle Line has just under 20 million trips per annum, though certainly not all of those are going through the Newcastle interchange, while the Hunter Valley Line has less than one million trips per annum.

No two cities are ever the same, but you can make some broad assumptions based on careful comparisons. Are New Zealand cities special, unsuited to rapid transit? Not at all. You only need to look at how many people use Wellington’s existing commuter rail, or have flocked to rail and bus rapid transit in Auckland when it was developed. What I’m pointing out here is that we now have examples on our doorstep of cities of comparative size and form doing this. The excuses of “Christchurch is too small” or “you’ll never get people out of their cars, we’re different” shouldn’t be taken seriously.

They built light rail, so we should too!

No, not quite. This is an important point to make. Firstly, when rapid transit proposals are on the table, there are no ready made excuses to shut them down without proper and serious consideration. Secondly, it also signals that we are perhaps a bit behind in our thinking, and we shouldn’t be afraid of spending money on key public transport projects to foment desired mode shift. We still haven’t got that right, and delays with light rail in Auckland are perhaps an illustration of that, despite the new GPS 2018.  Nevertheless, I think that Auckland has provided a really good example, over the last decade or two, of how increasing public transport spend can lead to positive changes (i.e. the flattening of harbour Bridge traffic and the rise of public transport as a way of getting to the central city). The Australian examples serve to shed any ideas that, say, a city like Christchurch can’t do that too (well, maybe we will have to see the results in future, but I daresay just getting it built is a good indicator that rapid transit in cities of this size is desirable). Finally, I would say that it is simply embarrassing to be a country that proclaims itself clean, green and sustainable and yet is really dropping the ball on providing efficient forms of transport in our major cities. I would have hoped that with a new government and GPS that redefines the transport outcomes and methods sought we would see demonstrable change, but instead there are delays in Auckland and Wellington and Christchurch practically does nothing about free money for implementing commuter rail (I can’t see Auckland or Wellington ever doing that, it simply boggles my mind and indicates something is terribly wrong – another topic for another day, but check out this post on Christchurch’s public transport administration and this one on Rolleston rail). We are an urban country, most people live in cities, and over half of us live in and around the three largest centres. This should be something we embrace.

Given considerations currently underway in New Zealand, It would be disappointing to see something less than what people might hope for, in terms of getting better quality public transport networks in our larger cities. I’ve already touched on how the talk around town in Wellington is that light rail could give way to “trackless trams”. Sure, that could be fine too, but my worry is that, once again, we are not spending money where we should be and are downgrading aspirations because, while we can justify spending huge quantities on roads, we can’t quite get there on public transport. Ditto for Christchurch and its considerations for mode on its rapid transit corridors (let alone getting agreement to simply increase spending on the bus network!), and need I mention the troubles Auckland is currently going through with its proposed light rail network. If these Australian cities can do something, why can’t New Zealand’s achieve something similar?