This article first appeared at TraNZport and is republished with permission.

The other day the “Mike Hosking of the South”, Mike Yardley, wrote an opinion piece that outright advocated for a four-lane, 60km expressway or motorway between the soon to be completed Christchurch Southern Motorway from Rolleston, 60km to Ashburton. The title of the piece was “Four-laning to Ashburton makes sense” but, unfortunately for Mike Yardley, it definitely doesn’t make any sense at all.

Making matters worse was the fact he seemed to get confused about the status of this “project” by insinuating it was “cancelled” by the current government, when it was actually a last minute election promise with no proper costings, no benefit-cost ratio or economic analysis of any sort, nor any business case or detailed planning whatsoever. For good measure, it is used by only 14,000 vehicles per day, which means that it is unlikely to stack up economically. Though he admits it is was deemed unsuitable for a PPP, he seems to think that spending, oh, I don’t know, about $1 billion on this roading project would be an economically sensible thing to do. Just to put the boot in, he scoffs at the $100 million for commuter rail between Christchurch and Rolleston promised by the Government in 2017 (neglecting to mention that this requires a detailed business case on top of high level business cases already delivered – check out this post at Talking Transport for more info on that). He also, ironically, calls the treatment of the Roads of National Significance “weaponised”.

I could go on about the fallacies in this opinion piece, but that would be giving it more time than it deserves. Instead, I thought it would be more informative and fun to focus on what other transport projects $1 billion could go towards in Canterbury instead.

I previously proposed a basic rapid transit network for Christchurch (see here, and here). My high-level, educated-guess costings for this were $300-400 million, which would leave $600-700 million to go even further by doing all or some of the following:

The ability to more than double the plan I outlined would almost certainly do more for the economy, improving road safety, people’s well-being, congestion, etc in Canterbury than four-laning to Ashburton.

One of the biggest problems with the Roads of National Significance was the amount of money spent and the total kilometres of upgraded road, which undermined much of the road safety case for them. For instance, Mike Yardley thinks spending $1 billion on 60 km of road is a good deal. In the meantime, the Government is spending $1.4 billion to improve safety on 1500 km of road over three years. That means, instead of spending up on a flash motorway in the name of road safety for just 60 km, and taking years to do it (the RoNS are still being finished ten years on), you could spread that money to in excess of 1000 km of road throughout Canterbury with more targeted expenditure. That’s a win, and it’s actually pretty frightening to think someone asserts otherwise.

You could get a lot for $1 billion. $206 million got 101 km of cycleway in urban Christchurch, so you could potentially get about 500 km. That would go a long way towards getting  more people cycling, reducing cars on the road, which would have congestion and safety benefits, not to mention climate change benefits. However, you could also fund less cycleway km and put the rest into public transport or road safety. Speaking of… 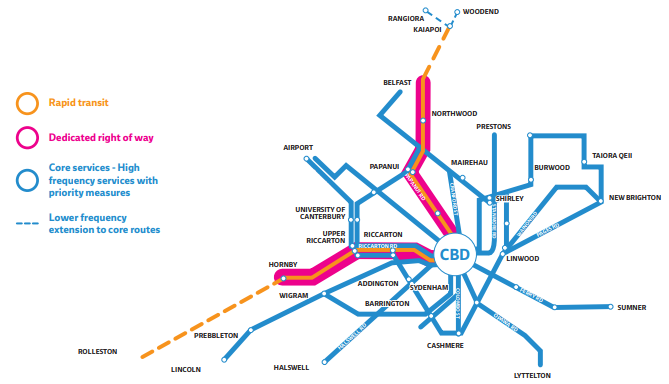 The Regional Public Transport Plan proposed a supercharged bus network (including more frequent bus routes), which will cost money, not to mention a need for (many) more km of bus lanes. $1 billion would go a long way towards achieving this, and probably a lot more. If you split the spending across better buses, rapid transit, and cycling, as well as targeted road safety projects, the benefits to Canterbury would be enormous. $1 billion can go a long way in the region!

There are many transport projects that would be a lot better to spend $1 billion on in Canterbury than four-laning State Highway 1 between Rolleston and Ashburton. If reducing congestion and improving safety between those two points is really necessary (and I’d argue in some respects that is somewhat true) then there are better (and cheaper) ways of doing it, including more targeted safety improvements on the road, and investment in a regional public transport route (which could be a train, but could also be a bus) to discourage journeys by single occupancy vehicles.