My last blog looked at census 2018 travel to work data.

I made an offhand statement that in Christchurch, there is a positive correlation between deprivation and public transport use. The lay-term translation is that “buses are only for poor people”. I also stated this wasn’t the case in Wellington and Auckland, cities where everyone takes public transport from the very rich to the very poor and everyone in between.

This was largely anecdotal though – although I’ve seen data confirming the Christchurch situation I hadn’t actually seen this for Wellington and Auckland. So I thought I’d just check my position on that.

I’m interested in this because it makes a big difference to the way we should be thinking about public transport in Christchurch. At the moment, outside of a few transport nuts like myself, buses are largely seen as a last resort option that you only use if all other options are exhausted. Whereas in cities with excellent public transport like London, Singapore, Melbourne etc. it’s quite obviously not the case – public transport is the fastest, most convenient way to move around, so everyone use it. I’m hopeful Christchurch can move towards this attitude to public transport. That will seem ambitious to some, but if we can demonstrate that Auckland and Wellington have already done it then it makes it seem a whole lot more realistic.

So I looked at the same 2018 travel to work data and compared it against the 2018 deprivation index. Deprivation is a measure of how poor people are. It looks at eight indicators from the census data including things like; “have you personally put up with feeling cold to save heating costs?”, and “have you personally continued wearing shoes with holes in them because you could not afford replacement?”. It then assigns a score to each area of the city from 1 to 10; 1 being assigned to areas with little deprivation and 10 being assigned to areas with residents experiencing high levels of deprivation.

I took all the areas with each of these deprivation scores and graphed the average public transport mode share, for Christchurch (just Christchurch City), Wellington (including Porirua and the Hutts) and Auckland. So for example, Auckland has a whole lot of areas in the city classified as Deprivation Index 1 (rich people). The first column shows that on average, these areas have a public mode share of 10%. In Wellington the corresponding mode share for their rich areas is 23% and Christchurch 2%. 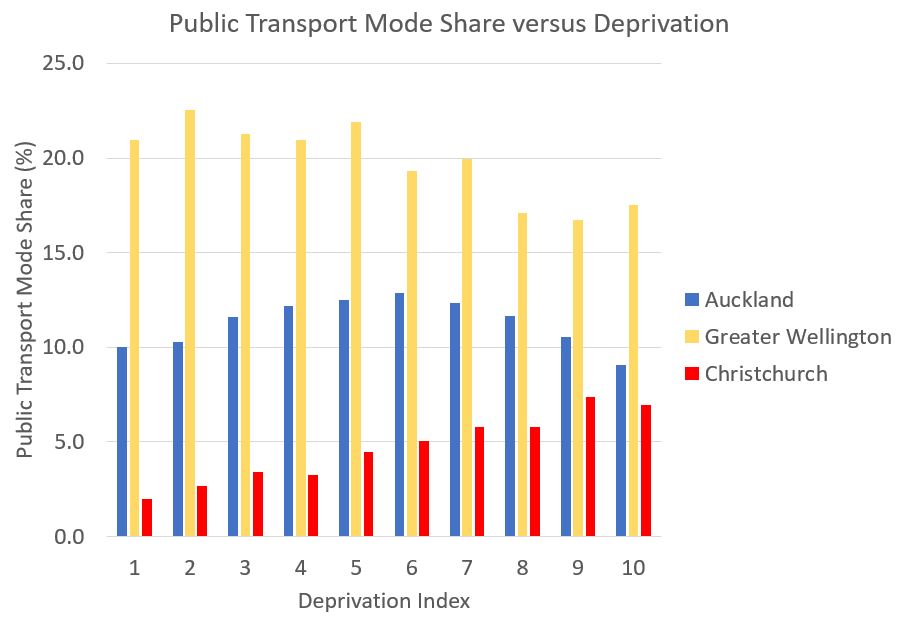 A few things pop out of this graph.

Firstly Christchurch has really low public transport mode share across the board, Wellington has high, and Auckland somewhere in between.

It’s quite a simple wee graph but to me it tells a powerful story. To increase public transport mode share in Christchurch, we need to not only raise the bars, but change the shape of them too.

2 thoughts on “Deprivation versus Public Transport Use”