This post first appeared at TraNZport and is republished with permission. For the first two posts in this series:

So far in this series, I have delved into two light rail projects in other cities; Ottawa and Canberra. Now I’d like to look at a city that is expanding rapid transit through another mode; bus rapid transit (BRT). Strangely, I am continuing a trend of looking at a capital city, though, but that’s entirely coincidental (honest).

That city is Belfast, the largest, and capital, city of Northern Ireland, in the UK. Belfast has an urban population of around 600,000 people and a metropolitan area of around 800,000 people. This makes it slightly larger than Wellington or Christchurch, and under half as big as Auckland. It is, apparently, the most car dependent city in the UK, which I guess gives it a bit in common with New Zealand cities! It’s transport system consists of a small, but notable, commuter rail network (which, incidentally, uses DMUs of similar design to Auckland’s EMUs). However, this post is not about the commuter rail network, but rather the new “Glider” BRT system.

Glider was introduced in 2018 and has led to a substantial uptake in public transport use. It consists of large, modern, 18 metre long articulated buses that have been described as “tram like”, and can carry up to 105 passengers. If that rings a bell, then it is likely because this sounds rather like a “trackless tram”; a concept utilising a tram-like bus and advocated as a cheaper alternative to light rail (most recently for Wellington). To me, it illustrates how “trackless trams” weren’t really a thing at all. More on that later, though. 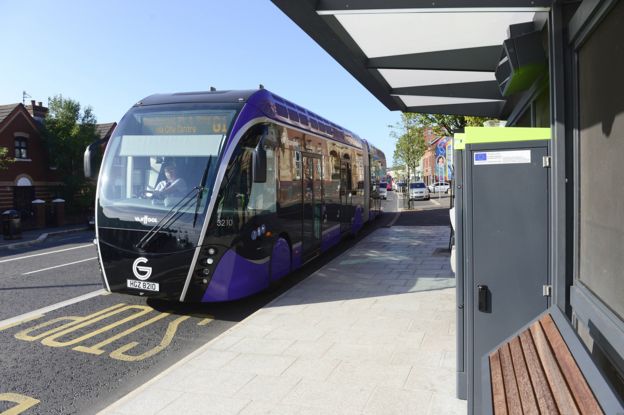 The buses (Van Hool ExquiCity articulated buses) run on two dedicated routes (G1 – West to East Belfast and; G2 city to Titanic Quarter) for a total of just under 25km. The route consists of a mix of general traffic running and bus lanes (i.e. the bus lanes are exactly that, and are not continuous).

Services run every seven to eight minutes, and the bus lanes are operational from 7am until 7pm.

So far, Glider has proved a success. Apparently, more than two million additional passenger journeys were made in comparison to previous bus journeys taken along the route, an increase of more than 30 percent. This, according to the public transport provider, means about 1.67 million fewer car journeys. Accordingly, Glider has been name-checked in contributing to the highest public transport usage in Northern Ireland in more than 20 years.

However, Glider has had its fair share of critics, particularly related to the imposition of bus lanes and its effect on car traffic. No news there. However, it seems to be having an impact on public transport usage, and is a positive, if small, improvement to the city’s public transport network. At the end of the day, you have to start somewhere, and if it’s having a positive impact, you can’t knock it too much.

Is it really rapid transit, though?

That’s a matter of debate, but I think it’s really a kind of faux rapid transit, and doesn’t meet many of the requirements that a true rapid transit system should. Glider’s reasonably low level of dedicated right of way means it would certainly sit at the lower end of the rapid transit spectrum, if it even makes it on there at all. The buses mix in with general traffic along the route, utilising what appear to be regular bus lanes at other points. Better than a regular bus route with no bus priority, but not really rapid transit.

Sure, it has higher capacity buses, and higher frequency of service, as well as some bus priority, but those things, frankly, can be done with normal buses, and indeed are. The real key to Glider is its brand image, and this is, indeed, one of the key principles underlining the whole project. Perception seems to be given a lot of importance in the overall Glider concept, and perception is certainly cheaper than spades in the ground. 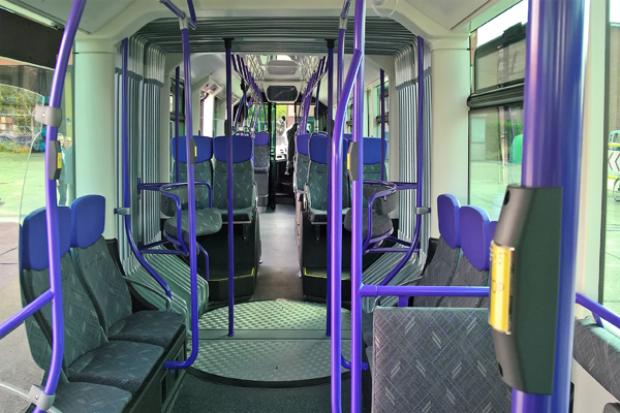 However, it seems Belfast is a city where it is hard to get investment in public transport infrastructure (which we know so well in New Zealand), so they are getting it where they can, and that is leading to more people using public transport. It is hard to argue that Glider has not been effective. However, it isn’t hard to argue what it is, and what its limitations are. Perhaps, in time, the routes could be upgraded to something better, having acted as a proof of concept and gaining some political capital to justify further investment.

A good example of “Trackless trams?

This is the thing I find really interesting about Glider, and why I wanted to look into it. Something that strikes me about Glider is how much it adheres to the principles discussed by proponents of trackless trams for New Zealand and Australian cities as an alternative to light rail. It illustrates the difficulties in taking a tram-like vehicle and making minimal infrastructure investment, and claiming that is rapid transit. Glider shows what this really achieves; a solution that is really only a bit above a normal bus service. This is very different from, say, a light rail line, or even a BRT line, with a continuous, dedicated right-of-way. It shows that the concept of “plonking a bit of paint down = rapid transit” is simply not a thing. A lot of the discourse around trackless trams focused on how easy and cheap it was to implement. However, this was misleading because it ignored the kinds of outcomes you might want from your investment; it wasn’t comparing apples with apples, just pretending to. Glider shows what you would likely get if you were to implement that approach. 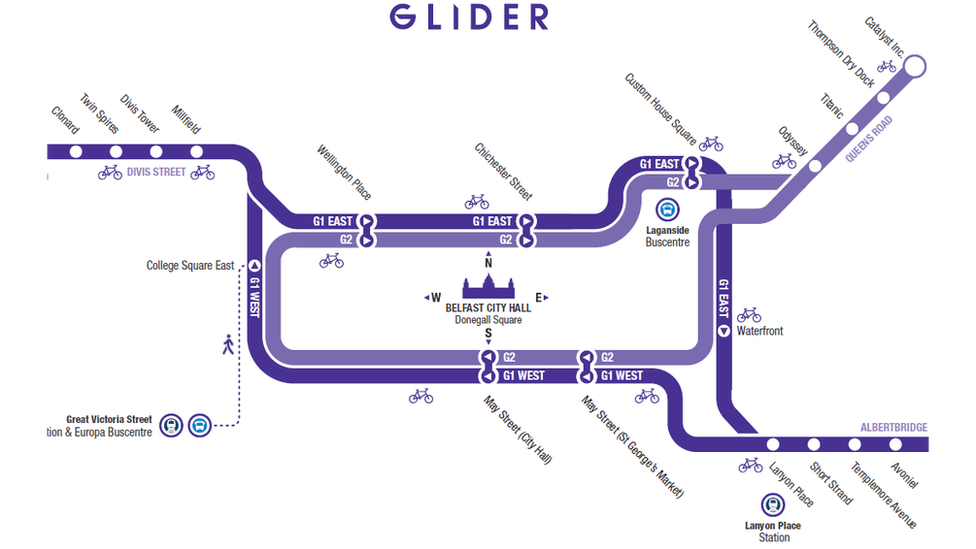 Not that that is a bad thing for Belfast. To give credit where it is due, the local transport authority are pretty up front about what Glider is, even if they do use the terms BRT and rapid transit. Just beware of what it  really is: a higher quality bus.

Glider’s cost was £90m, which works out at £3.6m per kilometre, or NZ$7.6m per kilometre. I don’t have a figure for how much of the route is bus lane, but that money is still significantly cheaper than, say, Canberra’s light rail at approximately NZ$60m+ per kilometre. However, the latter is in a complete dedicated right of way and has more than twice the capacity, and likely has a greater impact on land development along its corridor to boot. Don’t get me wrong, I think any improvement to public transport is great, and I actually think the Glider is kind of cool. It is a great example of a city doing what is politically and economically palatable; a solution molded to the context of the city. It certainly has led to an objective improvement in public transport in Belfast, culminating in an increase in ridership.

What I am saying, however, is that we should be very careful about claims made about particular rapid transit solutions. Always understand the outcomes you want, and remember that you usually get out hat you put in.

To look at it from another angle, if someone was to point to this as an example of something that could be built instead of light rail, I would ask “what outcomes are we seeking from our investment?”. Because that is what actually matters, and the solution is about balancing cost with effectiveness to get as close to those outcomes as possible. Put it another way; if a light rail project was proposed with Glider levels of dedicated right-of-way, I’d be outraged. It would be  waste of money. You could do that better with something like Glider.

Don’t buy into the hype of a silver bullet solution. It’s all about the details, and buying the right solution for the situation and the outcomes desired.

3 thoughts on “What other cities are doing: Belfast, Northern Ireland”